In Hokkien, this is called the "Kan Chia Mee" which means the "pull-vehicle-noodles" or in Chinese La Che Mian 拉车面. 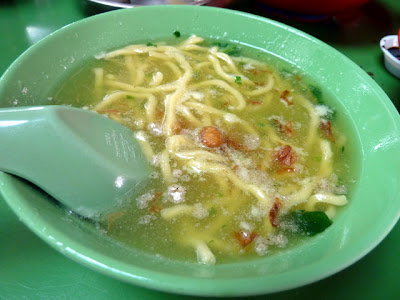 This is a very simple noodle soup prepared and served where ordered (not the usual cook upon order noodles) and hence has thicker gravy and a more tangy taste because of the contents of the yellow noodles. 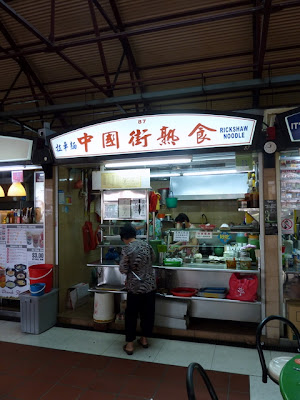 I suppose it must have been the cheap and easy to eat meal for the rickshaw pullers in the old days. When I asked the lady of this stall at Maxwell Market Food Centre (I wonder if this could well be the only heritage foodstall selling a dish of this kind) how long her stall has been operating. She answered, "60+ years", and without much of a pause, "since 1943". As there was a steady (not heavy) flow of customers, I could not engage her with more questions. She is also selling the mee-sua, another Hokkien cuisine. And I was told that her fried beehoon (rice vermicelli) is very good. There are also other typical southern Chinese breakfast food such as the yam-cake.

I know that in some temples, where there is an event, the kan-chia-mee is still one of the dishes being served. For convenience, it could be cooked in a big pot and served throughout the day. For many of the older folks, it was a nostalgic trip and they ate with relish. 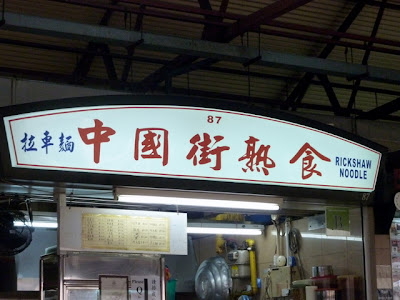 In Maxwell Market Food Centre, there are many foodstalls that started life in the old Hokkien part of Chinatown. This Kan-Chia-Mee stall was from China Street. During the urban renewal, many of the foodstall in the Hokkien part of Chinatown - China St, Nanjing St and Kiao-Keng-Kao (Outside the Gambler's Den as translated literally) moved to this vegetable market turned food centre. As part of its continuity, (in the old days, there were hardly any names for any of these stalls), the signage at Maxwell Market Food Centre would indicate that that particular stall was from China St or Nanking St. You can do a food heritage journey through these stalls here.

Would the kan-chia-mee be one of the soon-to-be-disappeared food? Like the rickshaw pullers? (^^) Take a look, take a taste ... and get the taste of the lives that some of our forefathers have gone through.

Postscript:
Thanks to James Seah for the lead and National Archives Singapore (NAS), here is a better image of what a kan-chia or rickshaw puller is like. 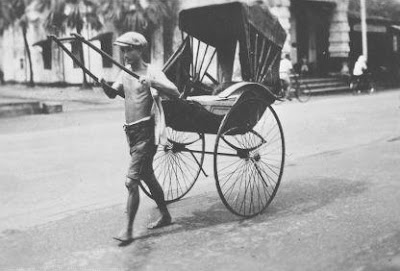 Thank you for a hostage food blog about the "kan chia mee", Victor.

The first time I tasted the original traditional "kan chia mee" was at a coffeeshop in Sungai Road, opposite the icework factory in the 1980s.

The tasty "kan chia mee" at 50 cents was served in a bigger bowl than the standard size served at most hawker stalls. The "Hock Chia" hawkers originated the recipes and the "kan chia" (trishaw pullers) in the early days in Singapore. This food is cheap and good for those workers
without going hungry for their daily meals. In the 1900s, one cent per meal which they could afford.

Its interesting that the "kan chia mee" has been passed down this heritage food for the memories of the younger generations...the "Kan Chia" were gone for decades but their staple diet to survive their old days, not a luxury food for curious foodies today!

Thank you for a HERITAGE food blog, referred to as "Foodage"!

Thank you for a HERITAGE food blog, referred to as "Foodage"!

Nice and nostalgic post about one of the rare food stalls that still serve fairly authentic fare from bygone days. I've sometimes wandered how things must have been back in the 40s and 50s when we still have rickshaws around. While the noodles are quite affordable, I doubt that they are enough to fuel rickshaw pullers. Maybe that's why most archive photos I see show that they're very skinny.

Your blog is amazing!
I'd love to be in touch with you.
Would it be possible for you to drop me an email at janecjj_92@hotmail.com?

Your blog is amazing! I'd love to be in touch with you.
Would it be possible for you to drop me an email at janecjj_92@hotmail.com?