On my prowl to see what's happening in the Greater Chinatown (I like this name mentioned in the chinatown.sg website), I passed by this very popular Hokkien pastry shop - Tan Hock Seng - along Telok Ayer St. This street is almost deserted during weekends but very crowded during weekdays. 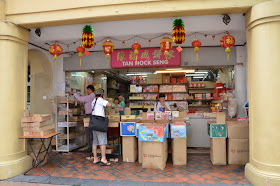 It was this past Saturday morning when I passed by with wife and daughter in tow. There was no crowd but there was a steady stream of shoppers, many of them stopping their cars to hop out, asked for what they wanted, bought them, and hopped back into the car again. Inevitably, conversation between the shoppers and the shopkeepers was in Hokkien. Imagine one asking for Fa Gao 发糕, when it would be more easy (at least to me) to ask for Huat Kueh. (^^) I should have taken pictures of all the pastry there that came with the names in traditional Chinese. And asked the shopkeeper to help me pronounce the names in Hokkien. (^^) 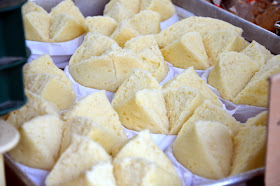 I know the few of my favourites like Beh Teh Saw 马蹄酥 and Pon Pia 碰饼. When young, and when hungry (if we were lucky, we could put one or two Beh Teh Saw and dip into a small bowl of kopi-o (black coffee). The Beh-Lei-Go (sticky sweet inside the Beh Teh Saw) was a delight to eat with the pastry and the black coffee. 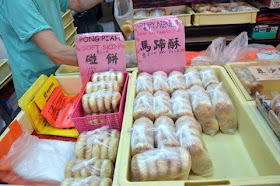 For the Chinese New Year, the favourites would be the Huat Kueh and Kueh Nern Go 鸡蛋糕 (steamed egg cake like the famous Japanese Kyushu Castilla (kasutera カステラ). I remember when I was young, I would help my Mum to beat the eggs in a big clay pot (like those glazed flower pot) with the big egg beater until almost a foam was being formed. It was a tiring exercise. No, no electric gadgets during those days. When the egg mix was considered good enough, we would put a "glass paper" onto a bamboo tray and pour the egg mix into it till almost the brim. If I remember correctly, then with a bamboo chopstick, a cross is made on the surface, probably to allow the cake to break up and expand when it is being cooked. Into a waiting wok of steaming hot water and some bamboo frames, the bamboo tray was placed. And a huge cover was being put over the wok, with wet towels laced around the cover when it sat on the wok. This was to reduce steam leakage. In those days, a cake would be the size with a diameter of easily 1.5 feet. When it was done, using a chopstick, that was split into four, we would dip into the ang-huay-bi (red colouring lotion) and then stamp onto the cake giving marks of four tiny red squares.

Huat Kueh was a little more challenging because yeast is needed. And the pantang bibiks (superstitious aunties) would ensure that we nosy and inquisitive kids kept our mouth shut and not ask any questions, or worst still, make comments. They were worried that the Huat Kueh (literally meaning the cake that grows) will not grow. (^^) 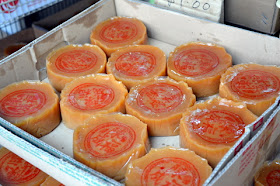 Tnee Kueh (meaning sweet cake), known to the Cantonese as Nin Kohl (Nian Gao 年糕), would be even more challenging to make. And so, it has gone the way of mass manufacture. In the past, after a couple of weeks, the Tnee Kueh would be hard as a rock (from which we could wash and put in the sun if there were any fungi, and then, slice them to steam and eat with shredded coconut, or deep fry with egg/flour batter), but these days they remain soft! What alien ingredient did they put in? 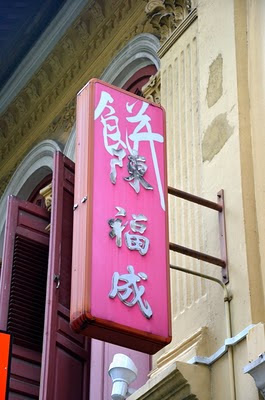 These days, save the endangered few, everyone would flock to shops like Tan Hock Seng (or many confectionery in any shopping centres of the housing estate) to get the mandatory Huat Kueh for offerings to the Gods. Alas, many of the mass produced ones are hardly edible. I sympathise with the Gods. 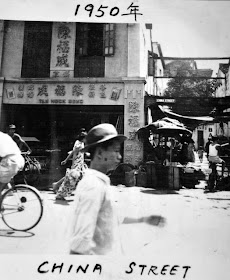 ack: Tan Hock Seng
The friend shopkeeper, who saw me trying to take pictures of his old shop, offered me another wall where the picture was more visible. Wah, that picture was taken in 1950! It was in the old shophouse along China St, just where the Hokkien called it the "Kiao-Keng-Kow", meaning "outside the gambler's den. 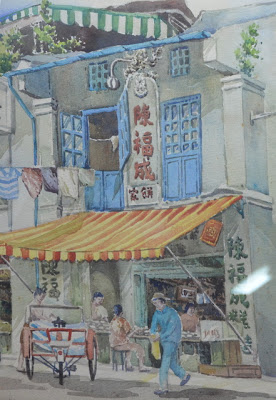