In early days of Singapore, in the Singapore's Chinatown, along the streets of Neil Rd, Kreta Ayer Rd and Keong Saik Rd, from the eve of the 7th Day of the 7th Lunar Month, these few streets would be bustling with activities as various 7 Sisters Festival groups would be preparing their altars and displays. I understand that there were also similar activities as far as Keppel Rd and Sembawang, hearing from people with whom I chatted with.

Today, apart from some in the privacy of their homes, there was no sign of such an event in Singapore. In the 60s right to 80s (I think), they were still visible, albeit, diminishing.

We were all too busy making a living that we did not notice the demise of this once upon a time an important event. With rapid developments, movement of households out of Chinatown, and less workers like the Majie and Samsui Women who probably formed a fairly big group, the festival just disappeared.

While there are still enough people who remember how the festival was held in Singapore, perhaps, it is timely to gather information from them. While documentation of our heritage is important, it would be great if the respective groups like clan associations could revive the festival.

Over time, beliefs and practices will evolve. The 7 Sisters Festival has been observed in Korea and Japan. In Japan it is known as the Tanabata Festival. As it follows the Gregorian Calendar, Tanabata is celebrated on 7th of July each year. For the Chinese, we still stick to the Chinese Lunar Calendar.  How would the 7 Sisters Festival be celebrated, only in the near future will we know. 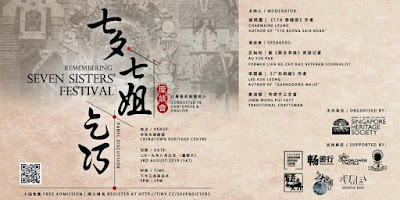 On 3 Aug 19, a few days before 7-7 (7th Day of the 7th Lunar Month), Singapore Heritage Society, with a few stakeholders will organise a Panel Discussion of "Remembering the 7 Sisters Festival" at the Chinatown Heritage Centre. Registered participants will get to have a taste of what is known as the 7 Sisters Cookie (七姐饼). It would be like old times for the older folks or a new experience for those who have never tried it. 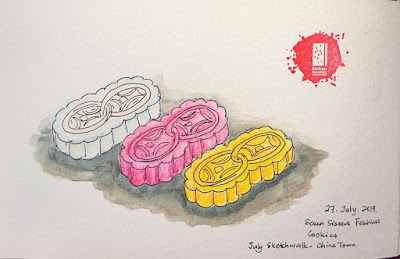